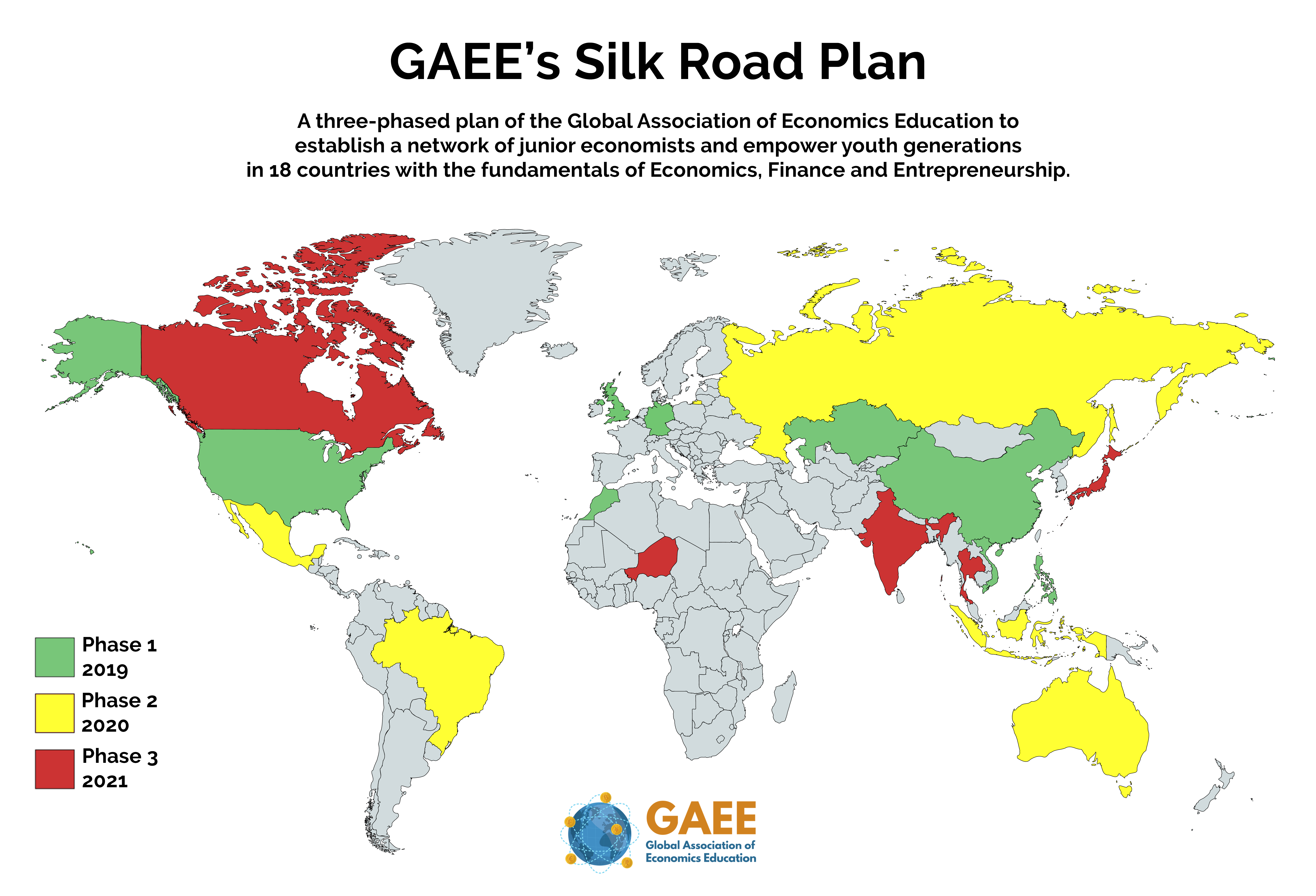 
The global expansion plan of the Global Association of Economics Education, GAEE’s Silk Road Plan, is launched today with the ambitious goal of expanding its network to 18 countries across the globe.

The Global Association of Economics Education (GAEE) and founder Le Dong Hai “DoHa” Nguyen is pleased to announce the global expansion plan of the organization, GAEE’s Silk Road Plan, that seeks to connect five thousand junior economists, financiers and entrepreneurs across four continents by 2021 through a network of its affiliated academic clubs, workshops, and hackathons.

Recently, the organization launched the BETA test of its GAEE’s Home App to selected users among the current 1500+ students in its network. The App featured video lessons meticulously crafted by its dedicated Education Team as well as interactive minigames, debates guidelines and assessments of the learner’s comprehensiveness. It has received positive feedback from most of its BETA testers, and the final version of the app is expected to launch on the App Store and Google Play early next year.

Since its establishment in 2017, GAEE has received valuable financial and logistical assistance as well as partnerships from top-notch corporations and organizations, including Microsoft, IBM, Google, AIESEC, Facebook and the International Association of Economics. Within only two years, the organization has already operated across eight countries, including the US, UK, Germany, Morocco, China, Kazakhstan, Vietnam and the Philippines. With the mission of empowering youth generations with the fundamentals of economics, finance and entrepreneurship fundamentals, its ambitious “GAEE’s Silk Road Plan” puts an emphasis on further extending its network and is expected to achieve by 2021 through three major phases.

In the first phase, GAEE will strengthen its base operations in the existing eight countries with the goal of having 150+ GAEE-affiliated academic clubs and 50+ GAEE Workshops and Hackathons. This will act as a foundation for the organization’s second step, which involves expanding to neighboring countries of current ones. By the end of 2020, GAEE expects to have expanded to five additional countries and to boast at least three thousand members.

With the ultimate touch of the third phase in 2021, GAEE will grow into a global nonprofit featuring 18 countries and five thousand students in its network. Along with other existing organization in this sector of the nonprofit industry, such as the Council on Economics Education, Foundation for Economics Education, Rethinking Economics, GAEE is expected to make powerful contributions to the reform of economics education on a global scale.

Le Dong Hai “DoHa” Nguyen, Founder & Executive Director of the Global Association of Economics Education and a member of the UK’s Royal Economic Society, believes in the importance of economics education and reinforces the vitality of GAEE’s Silk Road Plan, “It will make a lasting impact on the youth generations, who decides the health and efficiency of our future economy” he stated. “We expect to have our GAEE-affiliated clubs and events as educational hubs that make positive impacts on the regional economies. Our youth generations will be empowered with the fundamentals of economics, and as a result, make more rational and efficient choices.”

The Global Association of Economics Education (GAEE) has been a major force in the reform of economics education on a global scale. Founded in 2017, GAEE has been recognized as a 501(c)(3) nonprofit organization by the US Internal Revenue Service and successfully established its massive network of economics, financial and entrepreneurial learners via its GAEE-affiliated academic clubs and events. It boasts an innovative approach in teaching basic economic principles, financial literacies, and entrepreneurship skills by transforming traditional academic curricula into interactive and dynamic learning platforms.